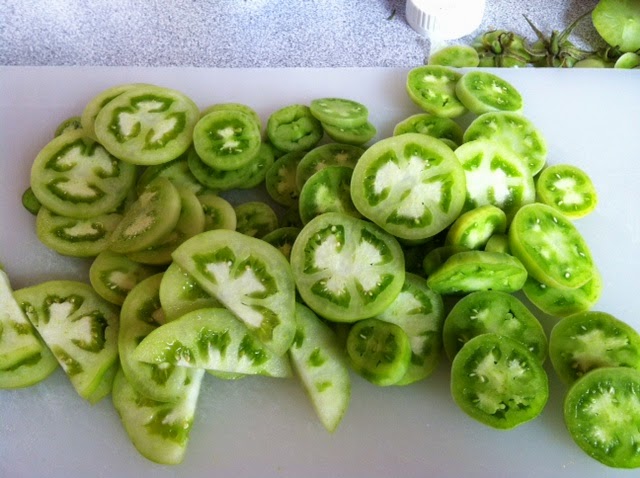 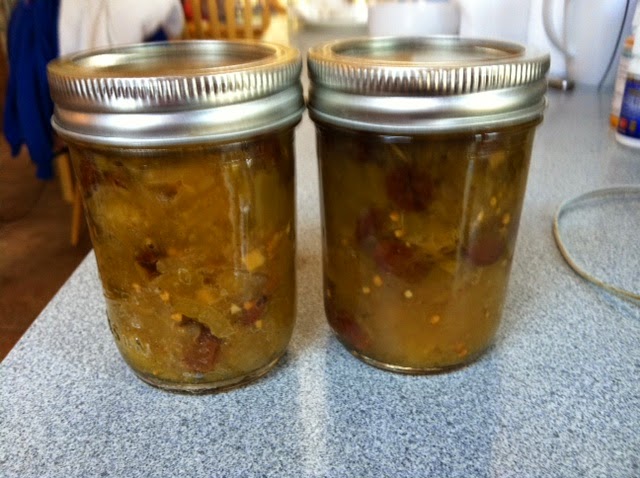 …chutney.  This is a recipe from the You Grow Girl blog.  I followed it faithfully, but the recipe came from a Canadian blogger and I think she has a different idea what constitutes a normal-sized apple. The recipe called for three.  I used Newtons and they were probably 4-5inches in diameter. The recipe made about 6 cups instead of 4.  I chickened out and only added ½ a jalapeño so it wasn’t all that spicy although I added about a tsp. of allspice.  It’s good but I would only use 2 apples next time because it has more apple than green tomato flavor. 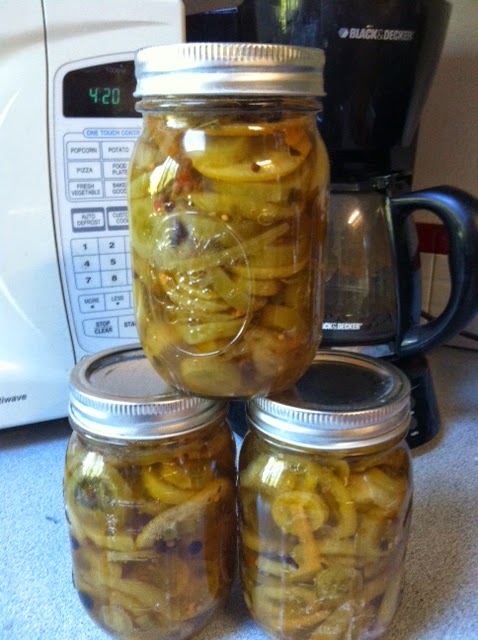 …and…green tomato pickles. This recipe was described as being “not as sweet as a bread and butter pickle” but I wanted the bread and butter flavor, so I compared it to some other traditional cucumber bread and butter pickles.  The difference was an equal amount of brown sugar, so I added that. I also just used an equivalent measurement of prepared pickling spices, since I had them on hand, instead of the individual spices.  The results are excellent. 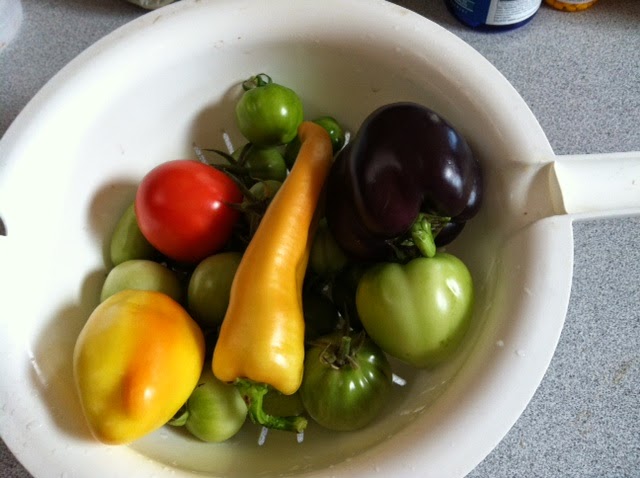 …and what to do with the tomatoes and peppers that actually ripened?  I had lots, so I made this recipe.

Roasted Tomato/Sweet Pepper Bisque
3 sweet banana peppers
2 sweet peppers
6-7 medium-sized ripe tomatoes
Olive oil
2 cloves garlic
½ medium onion
1 T. balsamic vinegar
Salt and pepper to taste
Peel papery skin from garlic cloves, wrap cloves in foil with a tsp. of water and place on over rack to roast while preparing peppers and tomatoes.
Cover a large baking sheet with aluminum foil.  Place peppers on foil and broil about 4-5 inches from heat, turning as skin blisters and browns.  When all sides are brown, put peppers in a paper bag and fold down top to hold in steam.  Once peppers are cool, remove skin, cut in strips and remove seeds. Meanwhile, cut tomatoes into quarters and remove seeds. Cut onion into wedges. Toss both tomatoes and onion with 1 T. olive oil, salt and pepper to taste. Spread mixture on foil-lined baking sheet and roast at 400 degrees, for about 30 minutes, stirring occasionally. When tomatoes start to brown, remove from heat and allow to cool slightly.
Place pepper strips in a blender with about ½ c. vegetable broth.  Blend until pureed, adding more broth if needed.  Squeeze roasted garlic cloves into mixture and blend. When tomatoes are cool, add to pepper mixture in blender and blend until smooth, adding salt and balsamic vinegar.  Add more broth to bring soup to consistency of bisque. Warm soup in microwave to serving temperature.

Posted by Lou Dunham at 3:19 PM No comments: